Spartacus: Gods of the Arena 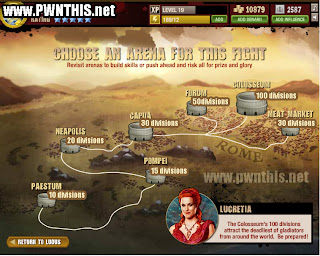 I have unlocked all the arenas. Just a quick heads up, the Coloseum has 100 divisions, the Forum has 50 divisions, the Meat Market and Capua has 30 divisions. I think it will take a couple of hours to complete the Coloseum 100 divisions even with energy hack, speedhack and 100% win and botting it. Not gonna try as there seems to be more pop ups in the game which screws up my botting.